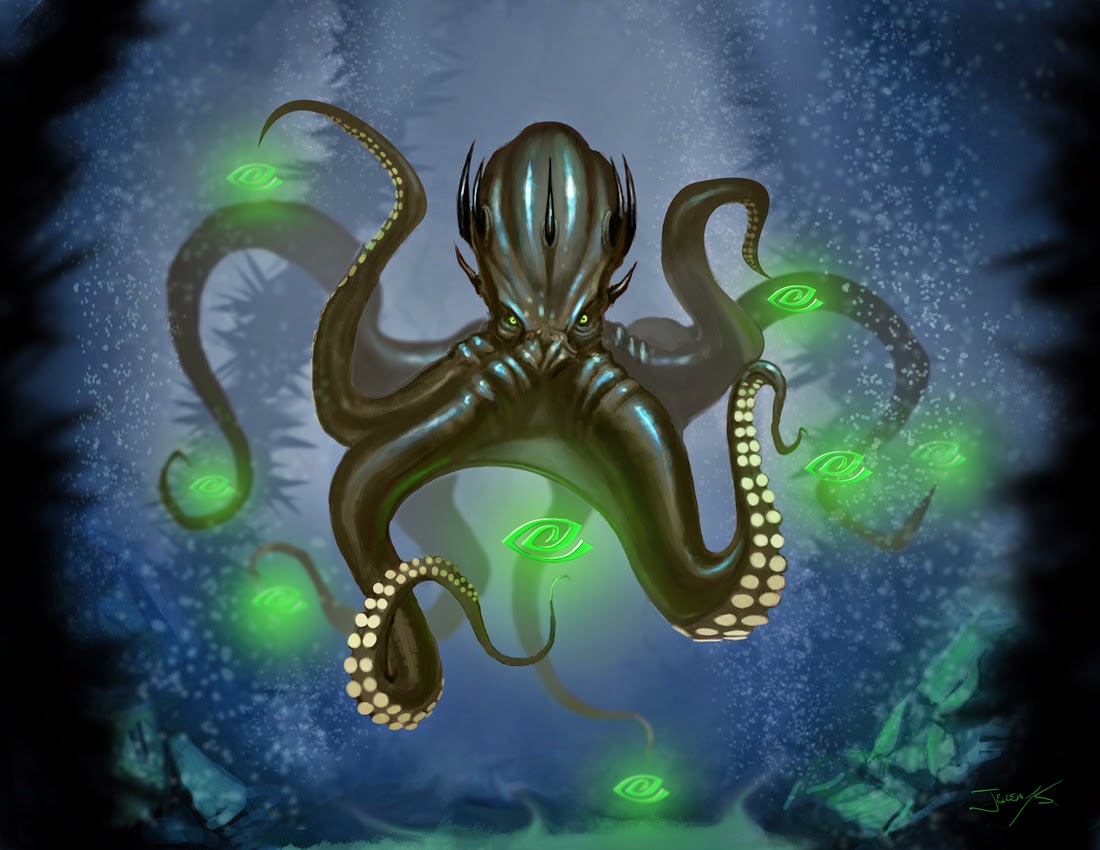 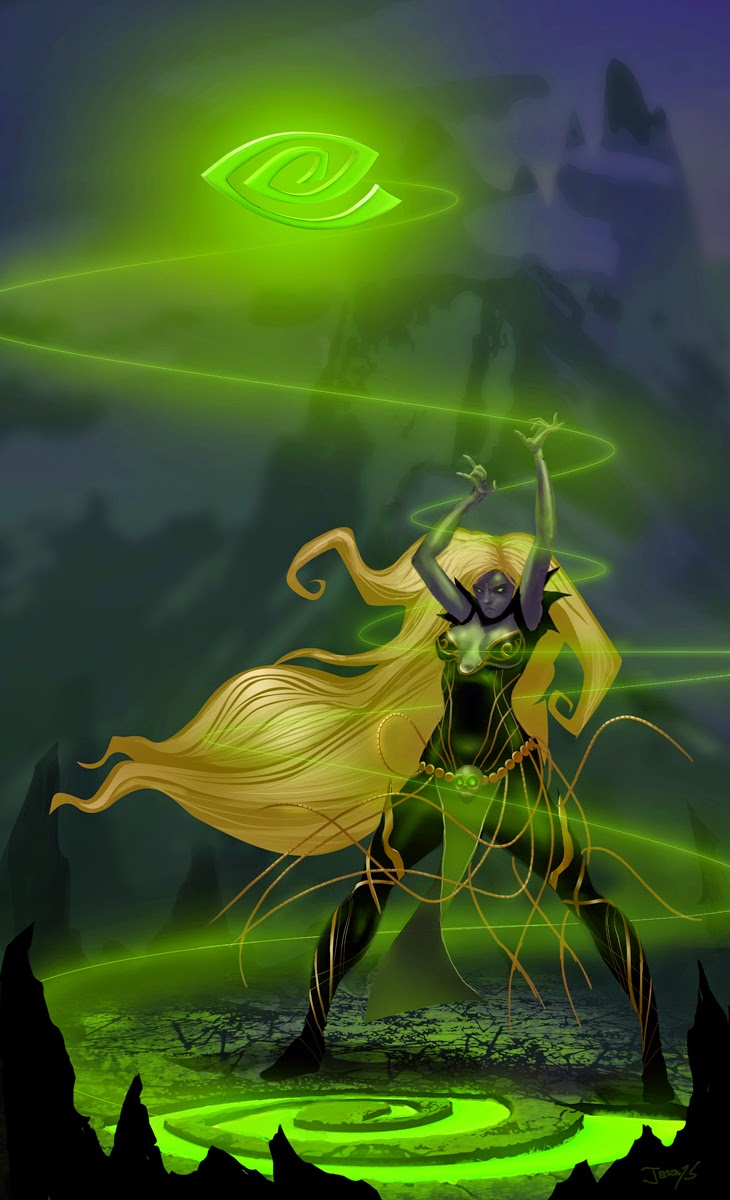 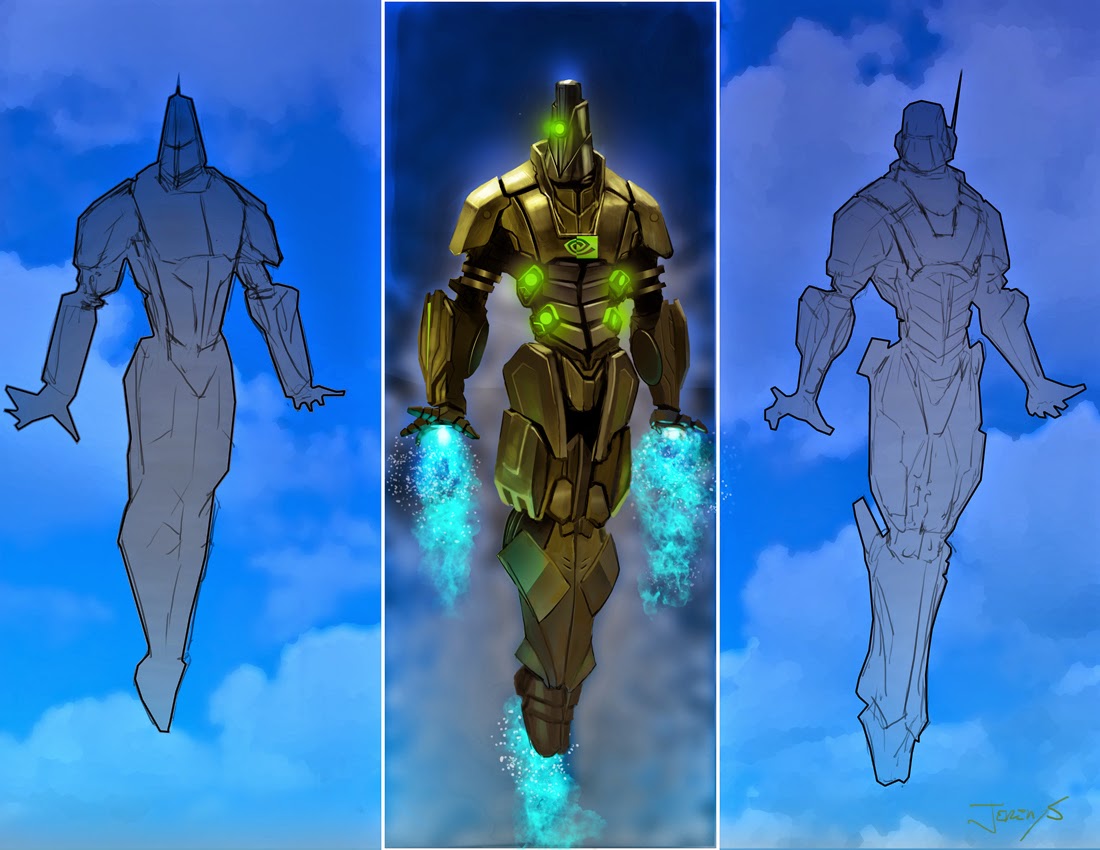 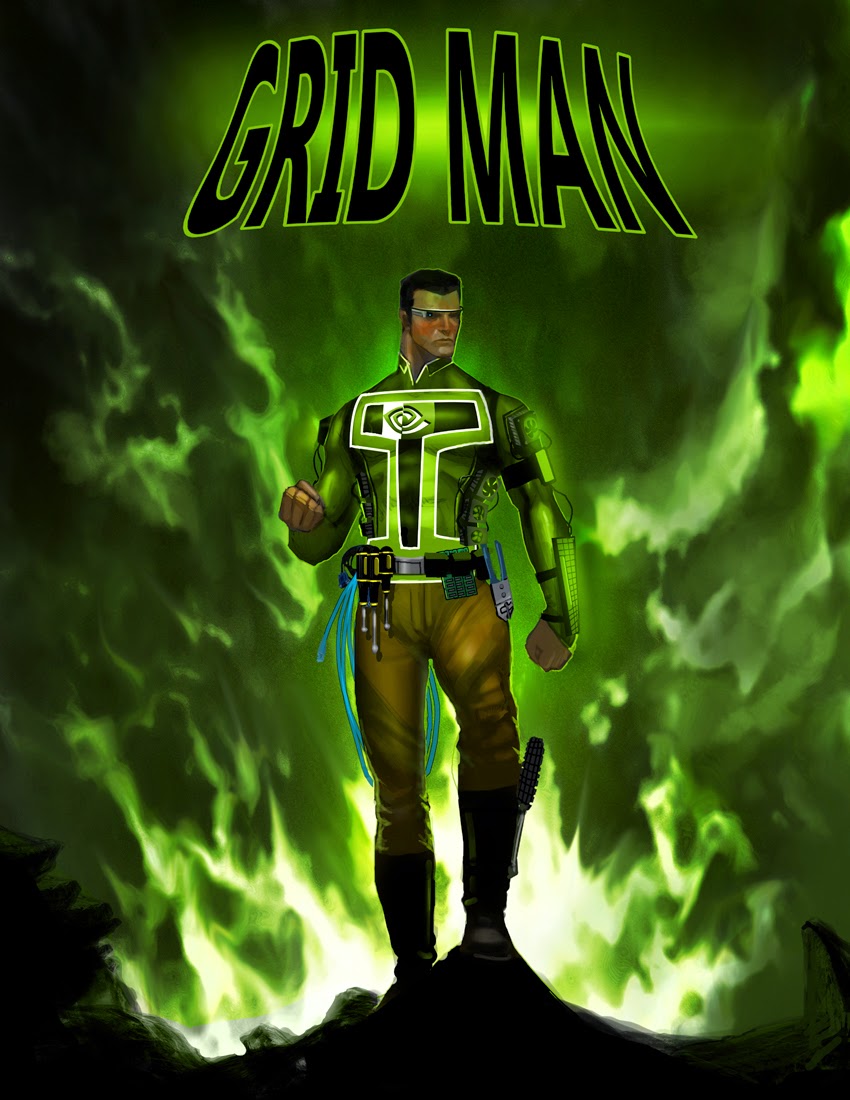 I recently had the opportunity to use NVIDIA GRID technology while doing live demonstrations at VMworld 2014 in San Francisco.  For four days I manned a pod showing off Adobe Photoshop CC running in a virtualized environment using a thin client connected to a server equipped with an NVIDIA GRID K2 card running a VMware vGPU instance through vSphere. The idea was to do "real work" during the show by designing a different NVIDIA themed character for each of the four days while pushing the limits of image size and resolution. I would create each character in real time while taking ideas and feedback from booth visitors-a far more powerful demonstration of what NVIDIA GRID can do than any canned or scripted demo could achieve. I did almost all of my work in Photoshop; however I did occasionally open up Illustrator to demonstrate working with larger vector files in a virtual environment.

Grid Man was my first character, a heroic mad scientist sort whose experiments with virtual graphics processing had escaped the lab. Aside from a few issues getting my Wacom Intuos tablet to work (such as pressure sensitivity), I was up and running in almost no time. The .PSD file grew to somewhere around 400MB as I worked, but the NVIDIA GRID K2 worked flawlessly. Even the large, GPU heavy procedures, such as flipping the image horizontally, were almost instantaneous- much faster even than my home workstation. Visitors loved the demo, and suggestions came pouring in. For example,  someone suggested replacing Grid Man's goggles with Google Glass lenses to make him more cutting edge.

Day two saw me creating a sorceress conjuring up an NVIDIA logo. I did my best to push the NVIDIA GRID to it's limits by selecting an image size larger than I would normally work, to 12 x 7 at 600 dpi resolution with over 30 layers. The K2 card shrugged it off and kept delivering extremely rapid performance, letting me design a very striking female character, complete with NVIDIA GRID logos and colors. Needless to say, this design was by far the most popular one I did during those four days!

Day three threw me a curveball: NVIDIA, along with VMware and Google, announced that GRID would work on a Chromebook powered by the NVIDIA Tegra processor, and turned to me for proof. I was unable to use my trusty Wacom tablet and stylus, and had to rely on a mouse and keyboard, but that was the only major change. NIVIDIA GRID delivered the exact same performance I had enjoyed on the thin client over the prior two days, and the flying armored superhero was the result. The audience couldn't believe I was doing this on a Chromebook and asked a lots of great artistic and technical questions.

My understanding is that each GRID GPU can support up to eight simultaneous users, so I decided to create a kraken-like eight-legged octopus for the final day of the conference. I was back on my thin client with my tablet, and once again NVIDIA GRID delivered top-notch performance.

All in all, it was a great conference, and I truly enjoyed the chance to see firsthand what NVIDIA GRID technology can do. I got to spend four days doing what I love while soaking up the positive energy of the people coming by who were amazed to see someone drawing live...and even more amazed when they learned it was all happening in a virtual environment.

On a personal level, the ability to centralize my assets and then access my environment from almost any device with the full performance I need to work effectively is liberating, because it frees artists from their studios to work whenever- and wherever-inspiration strikes.
Posted by JeremySaliba at 9:51 AM 15 comments: 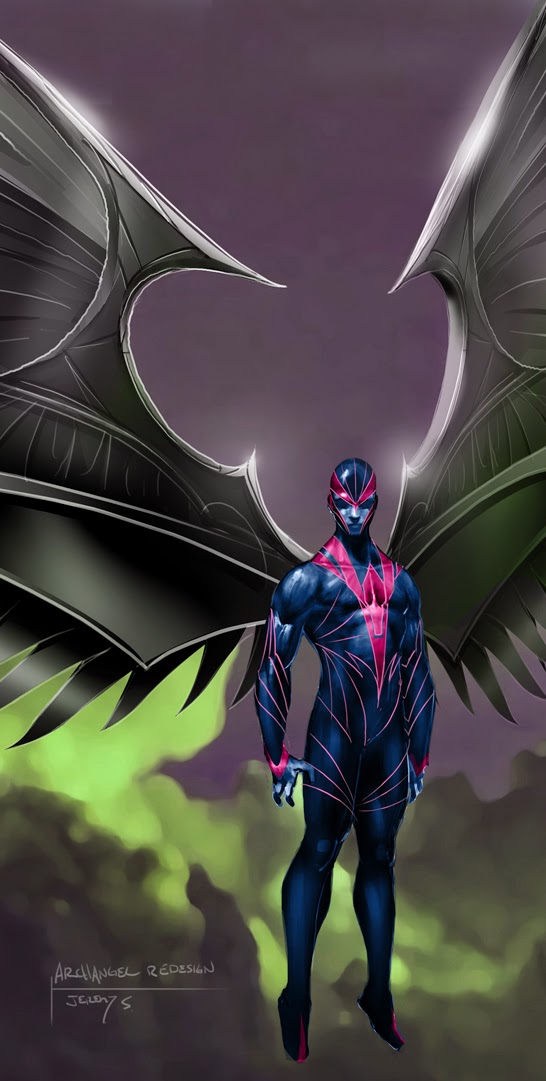 A buddy and I are doing a series of comic book character redesigns for fun.  The amount we've done is growing, and I'm going to try giving some of them a bit of polish to share them. 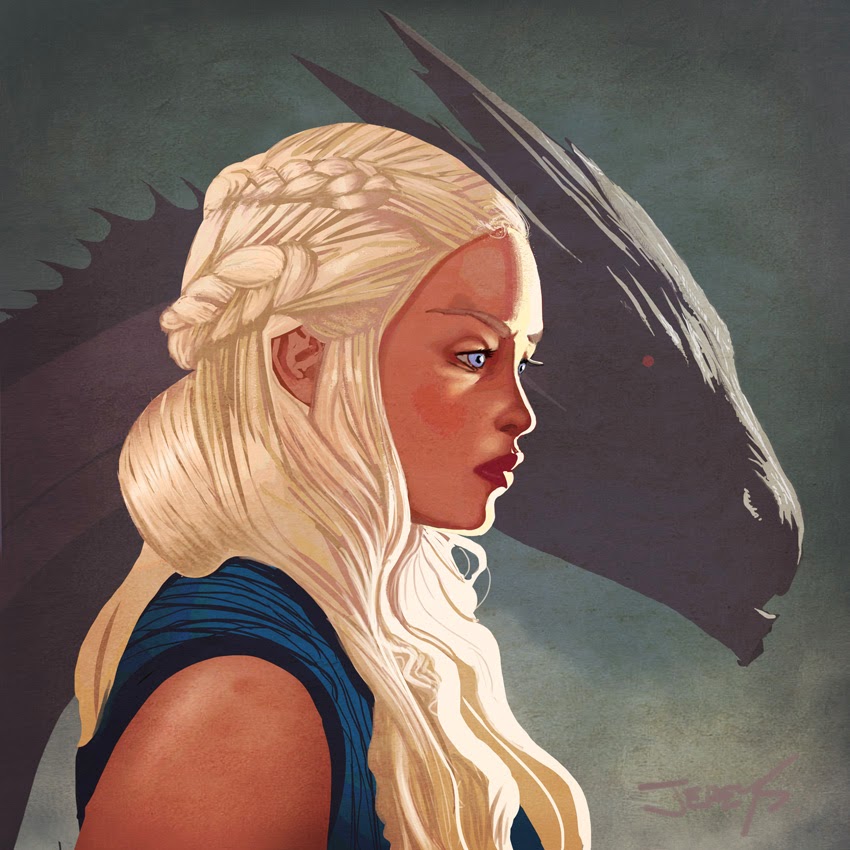 yay for dragons!
Posted by JeremySaliba at 1:22 PM 2 comments: 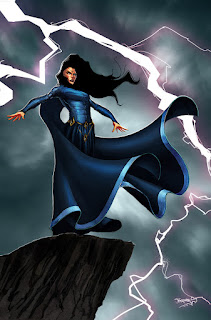 you win some, you lose some
Posted by JeremySaliba at 12:14 PM 7 comments: 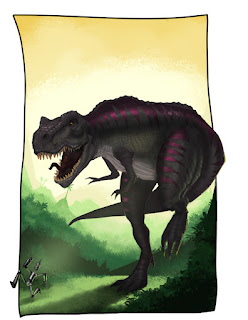 ...for a book called Parody.
Posted by JeremySaliba at 1:48 PM 3 comments: 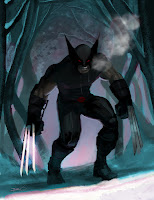 when i was a kid wolverine was known for 2 things- being short and mean. qualities i admire. decided to spend a few hours panting something for fun.
Posted by JeremySaliba at 1:29 AM 6 comments:

I'm ok with this one. A rare feeling.
Posted by JeremySaliba at 11:47 PM 6 comments:

Marvel asked for a couple more covers a while back, but I still haven't heard from them. I assume their still speechless at how awesome I am.
Posted by JeremySaliba at 1:09 PM 8 comments:

Girl with the Dragon Tattoo

saw it. loved it.
ipad sketch cleaned up n PS.
Posted by JeremySaliba at 10:43 PM 2 comments: 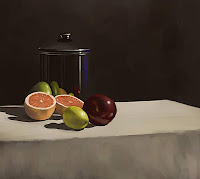 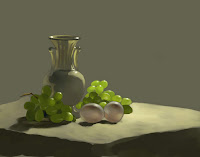 did each of these in about 2 hours. digital.
Posted by JeremySaliba at 2:37 PM 4 comments:

Been having fun with the app "Procreate" 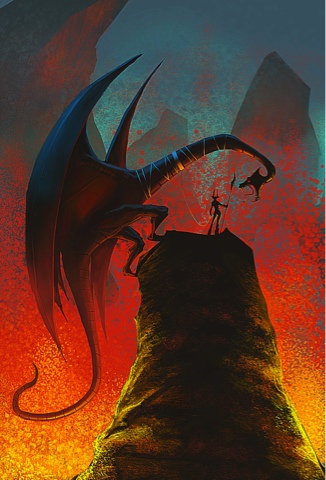 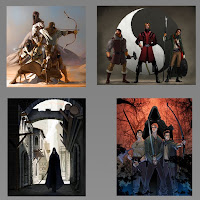 I've finally gone through my work and made some of my other images available for purchase-including the cover for the latest issue of The Wheel of Time graphic novel. Just click the link on the right to find my imagekind store.
Posted by JeremySaliba at 3:53 PM 6 comments:

Wheel of Time: Eye of the World Issue 16

this issue features the introduction of one of my favorite characters, elyas! for your daughter's sake, for safety's sake, go buy it.
Posted by JeremySaliba at 10:50 AM 3 comments:

Marvel contacted me to do some cover work, but wanted to see samples of my work with their characters. They gave me a list of four to choose from, so like a little over achiever I chose to do a cover for all four. The instructions I got where to create a cover image that was not story specific and had no other characters. I tried to have fun with it.
Posted by JeremySaliba at 12:33 AM 6 comments:

My pal Seamas and I are back doing covers for the Wheel of Time graphic novel adaptation, and the latest batch is on sale at Dynamite Comics (Seamas did the one with Rand being chased by trollocs through Shador Logoth). We're pretty excited about it and we're cooking up some cool artwork for future issues, so make sure to keep an eye out.
Posted by JeremySaliba at 10:21 PM 4 comments: